Synthetic Biology Gets Inspiration from the Sea 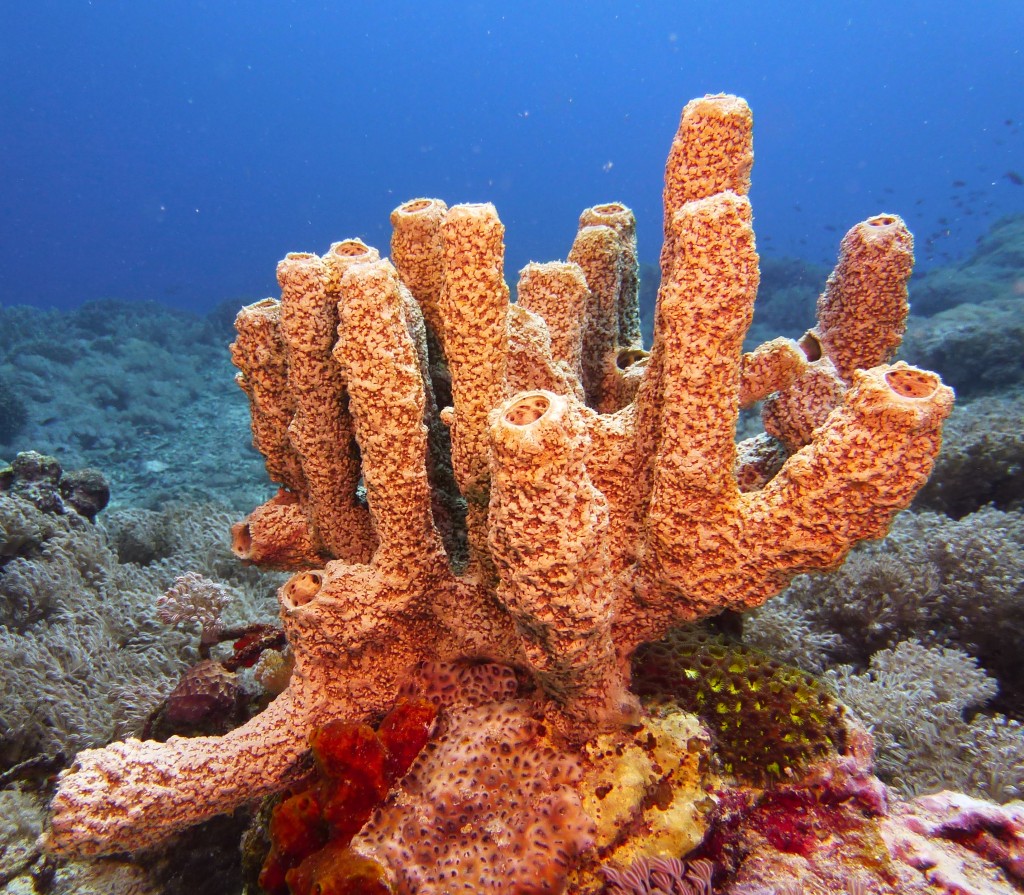 Synthetic Biology Gets Inspiration from the Sea

A solution for the problem of antibiotic resistance, threatening public health, may come from an unexpected source. Marine sponges, for a long time regarded as a source of a wide array of valuable metabolites, prove, once again, valuable in covering our needs in new medicines. Various species of sponges containing chemicals that are able to kill viruses and different types of cancer cells, including melanoma, can act as anti-inflammatory and painkilling agents, fight Alzheimer’s disease, and more.

Whereas most of the research is concentrated on finding new cancer cures, Dr. Jörn Piel from the Institute of Microbiology at ETH Zurich, Switzerland, believes that sponges may also provide new and potent antimicrobial molecules, a possible future life-savers in the fight against multidrug-resistant bugs.

“Shape shifting Proteus brings forth symbols […] of which each man dreams, according to his wishes.”
Source: Proteus – woodcut by Jörg Breu displayed in the Book of Emblems by Andrea Alciato (year 1531) as Emblema CLXXXIII.

Jörn Piel is working with polytheonamides – one of the most investigated compounds, synthesized by a bacterial symbiont of the sponge Theonella swinhoei. Polytheonamides, large ribosomally-synthesized cytotoxic molecules that undergo the largest known number of posttranslational modifications, belong to the group of proteusins (Freeman et al., 2012; Arnison et al., 2013; Wilson et al., 2014). Clearly, the sea is not only the physical source of active compounds, but also a source of inspiration for scientists to name them! According to Greek mythology, Proteus is a sea god that personifies the elusive spirit of water by constantly changing his shape. He is able to foretell the future, but only to those who are able to capture him. The N-terminal structure of the molecule of polytheonamide, as well as the overall helical shape, seemed to have reminded the discoverers of Proteus’ trident and body.

The polytheonamides consist of a chain of 48 amino acids, and among those – 13 non-proteinogenic amino acid residues, including C-methylated amino acids such as tert-leucine and others (Hamada, Matsunaga, Yano, & Fusetani, 2005; Matsuoka, Shinohara, Takahashi, Iida, & Inoue, 2011; Arnison et al., 2013). Another feature of a polytheonamide chain is the presence of both D- and L- amino acids, located at alternating positions. This allows the compound to fold into a unique helical structure that, at first glance, distinguishes it from any ribosome-synthesized protein or peptide. The toxicity of polytheonamides is caused by their function as membrane ion channels, highly selective for hydrogen ions. A molecule of polytheonamide is able to disrupt the bacterial membrane and incorporate into it with the help of the “trident” C-terminal region. The rest of the molecule, due to its hydrophobic nature, forms an ion channel and helps to retain the whole molecule inside the lipid bilayer. Due to its size, one molecule of polytheonamide can penetrate the whole bacterial membrane and form a single molecule-ion channel. Apart from the high cytotoxicity of the natural molecule, polytheonamides can serve as an example for the design of artificial channel-forming molecules for other processes in synthetic biology.

One of the unique features of polytheonamides is the presence of chiral isomers (D) of amino acid residues, whereas, normally, only the L-isomer is observed in biochemical reactions. This is the only example of an enzyme that is able to catalyze the epimerization of multiple amino acids on a peptide substrate (Morinaka et al., 2014). However, sometimes a compound with unusual chirality is required in a metabolic reaction. Presence of polytheonamide isomers among natural antibiotics inspired the Piel team to use epimerases – enzymes that catalyze inversion of chirality – in order to potentially gain new chiral isomers with antibacterial activity. Unusual peptides have already been found in nature: peptide antibiotics that contain many unique features including methylated and sulfur-containing amino acids, imino acids and amino acids with heterocyclic substructures. Many of them possess very strong antimicrobial activity and are promising candidates for the development of novel antibiotics, which is exactly what Piel and other researchers in the European research groups are now trying to do in the EC FP7 project SYNPEPTIDE.

While isolating chemical compounds directly from sponge extracts works well for research, the quantity is not nearly enough for an industrial-scale production of antimicrobial peptides. In order to solve this problem, it is very important to find a way to cultivate microorganisms outside their natural host or engineer a bacterium able to synthesize necessary compounds in the lab. Development of novel antibiotics can be achieved by incorporating chiral isomers and additional modifications into new antimicrobial peptides within engineered bacteria.

More than half of a sponge’s mass can be comprised of symbiotic bacteria that are able to produce the most structurally diverse molecules. These marine bacteria and sponges have been a reliable source of unique bioactive molecules. Functioning in close association with each other, sponges and their bacteria form a highly complex living “biochemical plant” that produces a number of yet to-be-discovered pharmaceuticals. However, it is very difficult to grow sponges outside of their natural habitat.

Marine genetic resources have a high economic value and an immense potential for synthetic biology. In the early 1950s, the first attempts to produce new pharmaceuticals via marine biotechnology resulted in the development of arabinosides against leukemia and viral infections based on extracts from the sponge Tectitethya crypta. The next commercially successful attempts followed only in 2004 and 2007, when an analgesic remedy, ziconotide (from cone snails), and the chemotherapy drug trabectedin (from sea squirt) were developed. Other bioactive compounds and enzymes, isolated from marine organisms, found high popularity and commercial success in biotechnology: these include shrimp alkaline phosphatase, green fluorescent protein (GFP) isolated from jellyfish, exopolysaccharides from extremophile bacteria or pseudopterosins from a sea whip.

Growing medical and commercial interest in the products of marine biotechnology, along with the needs of the global market for such products, offer a significant economic opportunity. It was estimated that a compound growth rate of the market (from 2011 to 2016) will comprise 4-12% annually (OECD, 2013). The spread is quite large, but mainly due to the fact that it is very difficult to estimate the pure contribution of all possible products derived with the help of marine biotechnology to the numerous markets they find their applications at. Such variety further complicates the assessment of the impact of investments and makes it difficult to define the most promising areas of future financial interest. In spite of the market success of aforementioned marine-based bioactive compounds and the rapid growth of their market, it is still quite challenging to directly quantify the market share of the whole branch of marine biotechnology within the global bioeconomy.

The relatively recent rise of marine biotechnology makes it hard to measure it using the standard economic indicators for land-based biotechnology. Alternative ways for measurement include patents, trade in research and development-intensive industries, gross domestic expenditure on research and development, the technology balance of payments, planned and ongoing research and development programs, manpower and funds involved in the research, and the impact of scientific publications, appeared as a result of this research. Such indicators offer an opportunity to estimate not only the economic impact, but also the innovation of an expected outcome, as well as the intensity of research and development, invested into the field. For example, of all patent claims on marine genes filed between 1980 and 2008, 95% of the patents were filed after the year 2000 demonstrating the strong increase of commercial interest in the field (Bloch, & Tardieu-Guigues, 2014). However, despite being a significant measurement of innovation, filing a patent does not always lead to commercialization of an innovation.

Investment in marine biotechnology is very promising for synthetic biology too. With the help of synthetic biology it is now possible to engineer cells for a specific purpose, modify biochemical pathways and control DNA, all of which accelerated the development of algal biofuels, renewable chemicals, food and feed products, and medical applications. Convergence of technology within synthetic biology offers a lot of stimuli for the development of marine biotechnology, and exploitation of ocean biodiversity will undoubtedly be the foundation for innovative products and technologies. This interdependence has a significant economic potential and will contribute to the sustainable use of marine bioresources as well as strengthen the non-economic value of ocean ecosystem services.