In a recently published article titled “Homo Politicus meets Homo Ludens: Public participation in serious life science games” published in the journal “Public Understanding of Science”, the authors attempt to find out whether, and to what extent, public participation can be realized via dedicated science gamification. The article, written by Olga Radchuk, Wolfgang Kerbe and Markus Schmidt from Biofaction (Austria), starts with the hypothesis that an involvement of the public in research-related activities can be successfully achieved through a participatory game design. Although there are many concepts for characterizing participation and an abundance of studies on gamification, surprinsigly there is no link between the two, particularly with a focus on the gamification of science.

The objectives of this study were:

Focusing on the participatory dimension of educational games, the authors reviewed a number of existing participation heuristics to characterize the most popular life science (mobile) games. The authors analyzed 87 science games with respect to their participatory and motivational elements in order to reveal the characteristics that make them an appropriate platform for public participation in life-science-related research.

The study revealed that the opportunity to engage people in participation using serious games for mobile devices remains in most cases unexplored: that is, the majority of the games did not contain any participative features. The features for socializing were lacking throughout all the games as well, even at the lowest levels of participation. The most popular genre of analyzed games was action, followed by puzzles, simulations, quizzes, strategies, adventures and mixed genres. Despite its leadership in popularity, the action games had one of the lowest levels of the participatory component among all analyzed games, whereas puzzles and simulations had the highest level of participation. 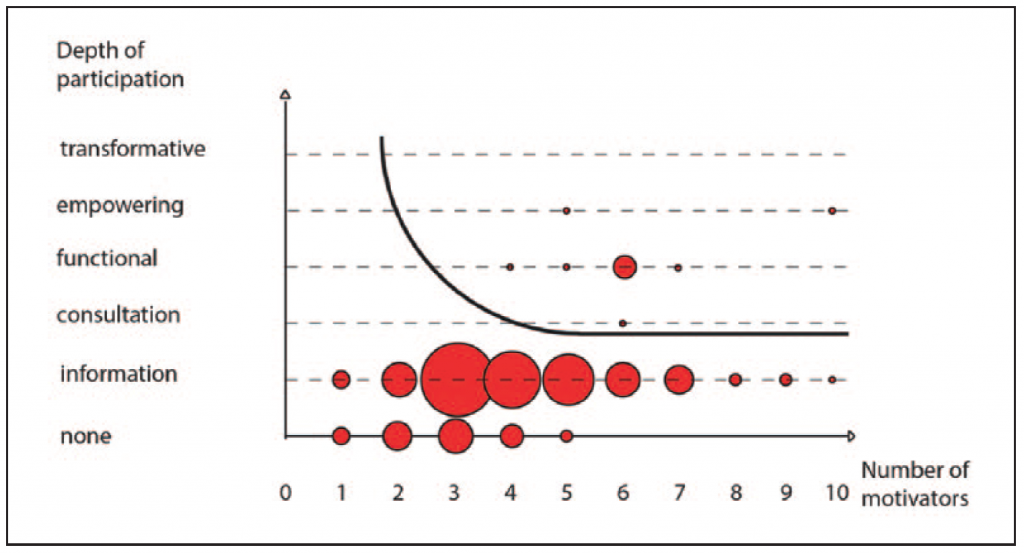 Only 10 games (e.g. FoldIt, EteRNA, Eyewire, Play to cure) out of the analyzed 87 were designed to involve players into the participatory process above the “Information” level, containing at the same time more motivators than the rest of the games. These data suggest that a variety of motivators in the game may support a higher level of engagement with the game, hence support the participation. The analysis is also meant to encourage game developers to fully utilize the potential of the variety of game genres, exploring the features that facilitate interaction and reaching the initiative of transformative research to the public.

The analysis of the top 10 participative life science games lead to recommendations for the development of new games in this field:

The full publication can be downloaded HERE.