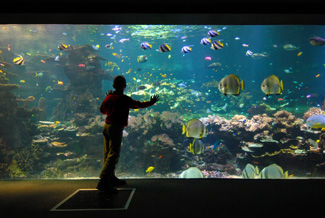 Biofaction and the french state-of-the-art Aquarium and aquatic public engagement centre NAUSICAÁ have agreed on a educative partnership to help protect ocean’s biodiversity and to educate and engage the public. Conservation and sustainable use of the oceans is a global challenge that can only be achieved by international collaborations and joint forces.

As an outcome of the project World Wide Views on Biodiversity, Biofaction published several info videos about the ecological and political challenges to biodiversity, including a section on the ocean. Nausicaá will use this information material to engage the public about the importance of the oceans and to explore means on how to protect aquatic biodiversity.

Created in 1991 in France, Nausicaa, Centre National de la Mer, which since its opening, wished to put Man at the center of its concerns. Nausicaa, Centre National de la Mer, educates visitors on a sustainable development of our activities on our blue planet.The mission of the Centre National de la Mer which goes far beyond that of a simple aquarium is to discover the sea, a living element and source of wealth for today and tomorrow, and provoke the viewer wonder at the beauty of marine life, but also educate and sensitize new behavior vis-à-vis the Ocean. The evolution of the state of the ocean in recent years has proved him right and confirmed the need to worry about the future of the planet as well as marine resources.