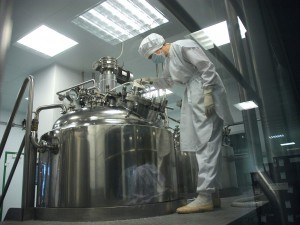 “Human-engineered microbes are workhorses of the pharmaceutical and chemical industries, churning out biofuels, drugs, and many other products. But they can cause big problems if they become contaminated by other microbes or viruses or escape into the environment. Now, a new type of microbe that can survive only on artificial nutrients promises better security against such mishaps. The strategy, described in two papers in this week’s issue of Nature, might ultimately be used to control genetically engineered plants or other organisms released into the wild to create products or clean up pollution. …

To lower the chances that any of the engineered microbes can mutate and survive without the special diet, the groups altered three genes to require the synthetic amino acids. “It really adds increasing layers of security onto this system,” says Tom Ellis, a synthetic biologist at Imperial College London, who was not involved in the research. Neither group has yet detected any successful mutations in the microbes. “They’re opening a door into a completely new area for investigation in biosafety,” adds Markus Schmidt, a biosafety expert and consultant in technology assessment at Biofaction KG in Vienna.” (From Science Magazine News.)

The term and the concept of the “genetic firewall”, the idea to use xenobiology as a tool for biosafety was introduced in 2010 in a visionary paper by the founder of Biofaction:

The two papers now published in Nature represent vital steps in realizing a future fully working genetic firewall. Development of a viable firewall for organisms, however, need to take into account not only technical but also technology governance and even societal issues, as described in: