Much can and has been said about an issue that we face globally today and that endangers human health in a very real way: the problem of ever-increasing antibiotic resistance. But what does this problem actually entail, and how can we make it tangible? What does the work of scientists tackling that problem look like if we don’t fall back on images from films with clanging sirens and biohazard suits? At the core of the problem lies the search for new and novel antibiotics, a quest it turns out, which is nothing more or less than a quest powered by curiosity. It is that quest, on which Biofaction wanted to invite young and old players alike when it launched TEREBRA – an exciting science game tackling the world’s antibiotics crisis head-on. 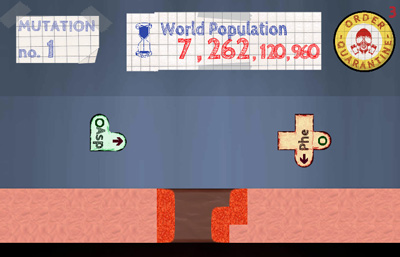 In TEREBRA the player is a scientist who fights antibiotic-resistant bacteria that cause global epidemic diseases. At every level, new antibiotics have to be constructed that can keep up with resistant strains of bacterial pathogens. As long as the player manages to create efficient antibiotics the world remains safe.

Every lock has a key. Bacteria have an outer cell wall with tiny unique openings that can be torn open by the right peptide antibiotics similar to the way a key opens a specific door. In TEREBRA the player has to envision and design the right “molecular keychain” for each type of bacteria that threatens to bring with it a global epidemic.

A Puzzling Job. The peptides consist of amino acid modules that have to be combined, folded and assembled like a chain. Once that combination fits the membrane’s opening, the cell wall is ripped apart, which means the player has successfully created an effective antibiotic peptide and destroyed the bacteria causing the disease, or in other words, the world is saved from a pandemic disease. But, just as in real life beyond the screen, nature strikes back and the next level awaits you with a new challenge.

The longer one plays, the more resistant the bacteria become, making it increasingly difficult to dispatch them. At each level, the player, like a scientist, has to compile ever more complicated and novel types of peptides to keep the pathogens at bay.

Epidemic Outbreak: It’s just a game, isn’t it? So what do we mean, when we say that the search for novel antibiotics is a quest powered by curiosity? And how does a game fit into that? It turns out the game is very realistic when it comes to describing the real world difficulties of identifying and constructing novel antibiotics. Science has found fewer and fewer new antibiotics in recent decades, and, much like in TEREBRA, constructing an effective and efficient new one becomes more and more difficult over time. 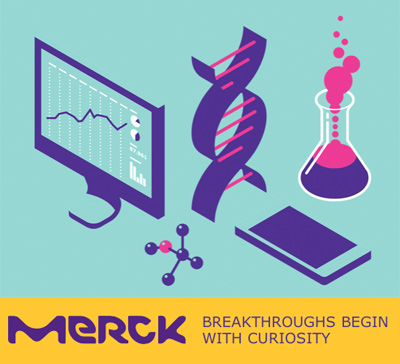 The qualities that are needed in this quest are the will and capacity to design novel antibiotics: molecules that do not exist in nature. So it is not enough for scientists (and the players of TEREBRA) just to be smart and hard-working, but on top of that, they have to be very creative problem solvers and stress tolerant to really outperform newly evolving bacteria.

Maybe one of the reasons, why in the past decades the success in finding new antibiotics was limited, lies in the fact that research and industry applied more of the same old strategies to a new problem. Today we know that when we find ourselves in such a deadlock, we must celebrate and support curiosity, and that encompasses the four curiosity elements established by Merck, a leading science and technology company as a result of their “Curiosity Report” from 2016: openness for other ideas, inquisitiveness, stress tolerance and creativity.

TEREBRA is a fun and stimulating game, but in simulating a crucial problem from the real world, it also seeks to stimulate creativity and enhance stress tolerance as, much like beyond the screen, the challenges we face become ever more demanding.

Curiosity is also not just fun, but rather it directly fosters innovation. Since anyone can be curious, anyone can become innovative – the right environment and mindset can unleash the potential to think and act creatively.

TEREBRA is an ideal test bed to stimulate creativity and enhance stress tolerance as the challenges get even more difficult.

Merck’s * Curiosity Initiative explores this in further depth with their “Curiosity Report”, and if you want to find out how curious you are, check https://curiosity.merckgroup.com/interactive

* Merck is known as Merck KGaA, Darmstadt, Germany in the United States and Canada